Attention, limited quantities for this Clos de Vougeot Grand Cru 2017 of Domaine Méo Camuzet ! Among the best references of Burgundy, magnificent bottle in a vintage considered to be of very high level in Burgundy.

Clos de Vougeot is a wine whose name is among the best known in the world. The appellation has about fifty hectares, divided into a multitude of plots owned by as many estates. The wines of Clos de Vougeot will not all be the same, it is very important to select the wine and its producer.

Domaine Méo Camuzet located in Vosne-Romanée is one of the owners who offer a Clos de Vougeot of high quality: intense dress, sweet and complex bouquet with aromas mixing plants, red and black fruits, mushrooms ...
On the palate a sweet and fleshy wine, very ample and long in the mouth.

This Clos de Vougeot grand cru of the exceptional 2017 vintage is concentrated and silky, powerful and refined. Its aging potential is naturally important, at least 15 years in good conditions.

Purple velvet dress is the archetype of the beautiful Pinot Noir. Its aromas are very marked by black fruits (ripe cherry, plum, blackcurrant,...) as well as a spicy side (peppers, liquorice, cloves, nutmeg,...). A candied side develops as we age, combined with the complexity of the tertiary aromas that draw on the notes of meat.
Paired with musky, marbled and tender meats: prime rib, braised lamb, roasted veal or a beautiful piece of game birds. It goes perfectly with soft cheeses and washed crust: epoisses, langres, soumaintrain and cîteaux cheese.

A wine to offer yourself as a connoisseur or to offer as a gift to a lover of Great Wines and Grands Crus of Burgundy! 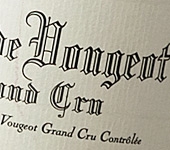