Whether red or white, this is the wine King Henri IV had in mind to go with the
Sunday chicken he wished every family in France to enjoy. It is as accessible as it is amiable, honest and straightforward in taste. The red, which has the gleaming crimson highlights of the Pinot grape, veers sometimes towards an intense garnet hue or, when young, a bright cherry. Its aromas run a classic spectrum through cherry, gooseberry and blackcurrant to notes of underbrush, mushroom and spices (cinnamon). This is a big-hearted wine, powerful in the mouth, full and meaty, and its tannins (more conspicuously present in the younger wines) are well smoothed-down.

The white is pale gold in colour or sometimes a little darker. The fragrance is of white flowers (acacia, may) mixed with plum. When older, ripe apple, fig, pear or quince appears, as well as some spicy notes. Lively and clean, it has both energy and elegance while nevertheless remaining direct in its expression and unfaultingly likeable.

Red: virile and broad-shouldered, this wine is nevertheless softened by wellmarked fruit and by a degree of roundness on the palate, so it is only to be expected that meat dishes will be the first choice to match it. Its aromatic power is sufficient to cope with chunky or smooth pâtés, roasted or fried offal, and suppler meats such as pork (roasted or in sauce), well-roasted lamb, or braised veal. It goes best with cheeses that have a well-marked flavour: Époisses, Langres, Ami du Chambertin...
Serving temperature: 13 to 14°C.

The hill-slopes of Comblanchien and Corgoloin are carved into the hard limestones of the Upper bathonien. The slopes are gentle and regular, not reaching the rim of the plateau. In the upper part the brown soil is only slightly limy with, lower down, a thick layer of pebbly scree, while at the foot of the slope is an extensive area of brown soils over accumulated alluvium. For their part, the wines of Fixin and Brochon lie on the red-brown soils of the piemont composed of alluvium mixed with pebbly limestone. 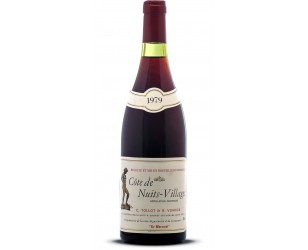