The colour is that of very pale yellow gold, brilliant and crystal-clear. The nose develops subtle fruit aromas (peach, pear) or acacia, honeysuckle and bracken, often over notes of fresh almond, hazelnut, cinnamon, butter, and sometimes honey. Exotic fruits are sometimes present, as are citrus notes (orange peel). On the palate, this white wine is dry and well-rounded, mineral (gun-flint) and lively from the first attack. Acidity and fatness come increasingly into play. The structure is harmonious, fresh and round.

Its clean, open attack and its citrussy notes call for dishes which can somewhat mitigate its ardour. An oily fish, poached or simply fried, will play this role, especially as the wine’s range of floral aromas respond splendidly to the fine salty flesh. Variations featuring seafood will also do well, as will risottos containing sea-food or mushrooms whose mellow texture will blend harmoniously with the acidity of the wine. It is also well-suited to goat cheeses, Bleu de Bresse, Comté, Beaufort, and Gruyère.
Serving temperatures: 9 to 11°C for young wines,11 to 13°C for older wines.

The SAINT-VÉRAN AOC, which was granted in 1971, lies in the South of the Mâconnais region, forming a belt around the appellation POUILLY-FUISSÉ.
As it is often the case in Bourgogne, the AOC embraces a number of villages from Prissé and Davayé lying to the North of the Rock of Solutré to Leynes, Chasselas, Chânes, part of Solutré-Pouilly and (of course) Saint-Vérand itself all lying to the south. The soils, ideally suited to the Chardonnay, produce only white wines.

The appellation SAINT-VÉRAN is split into two separate islands by its close relative Pouilly-Fuissé. Both occupy slopes forming part of the chain of hills to which the Rock of Solutré belongs. This rocky backbone is made of fossiliferous limestone of the Middle Jurassic. On the Western side are older (lias) rocks covered with grey marls on which the vineyards of Chasselas and Leynes occupy South and West-facing sites. The gentle Eastern slopes are composed of marly limestones on which are found the East-facing vineyards of Prissé and Davayé. At Chânes and Prissé, on the left bank of the little river Grosne, the vines grow on fossiliferous limestones, often overlain by a layer of clay-with-flints with “chailles”. 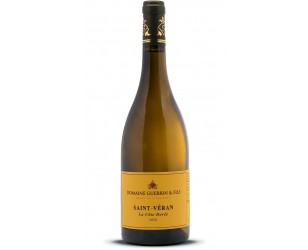