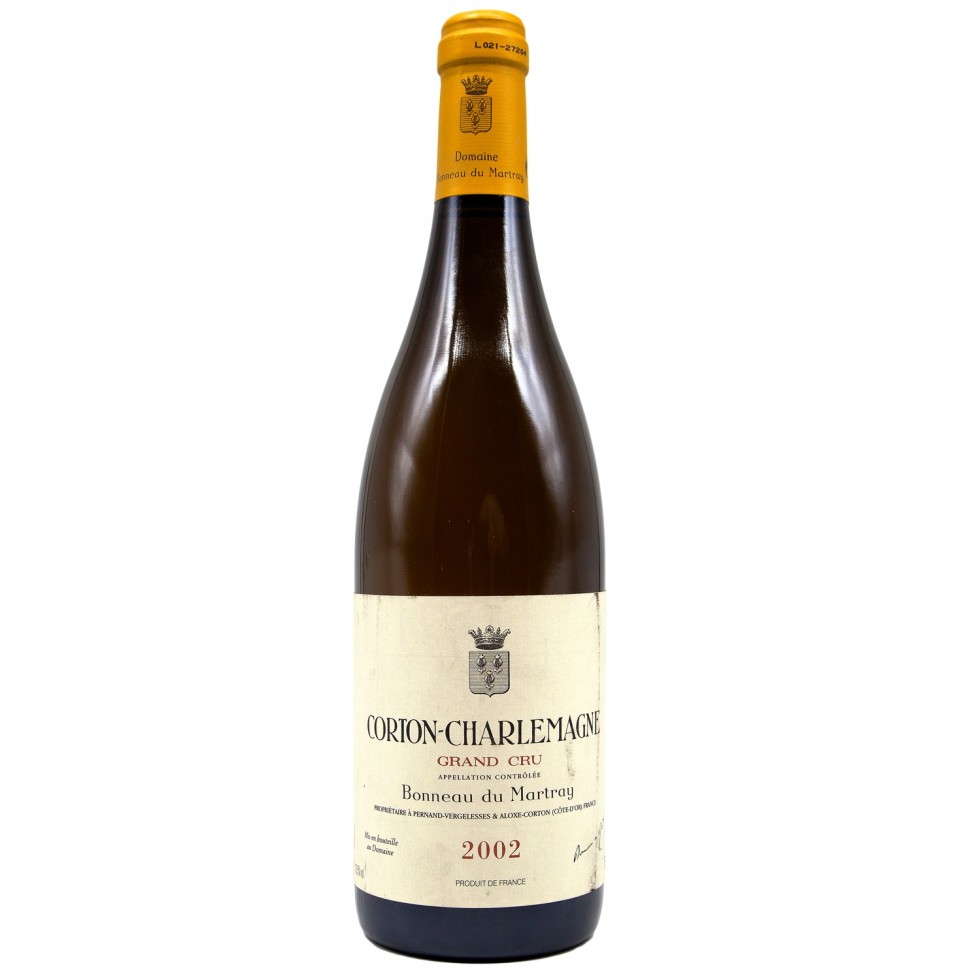 Among the world's greatest white wines, Corton Charlemagne Grand Cru takes time to express all their elegance, complexity and depth. Here in the 2002 vintage, Domaine Bonneau du Martray makes it an exceptional vintage to produce a wine of unparalleled richness and depth. Wine for sale on a unit basis. 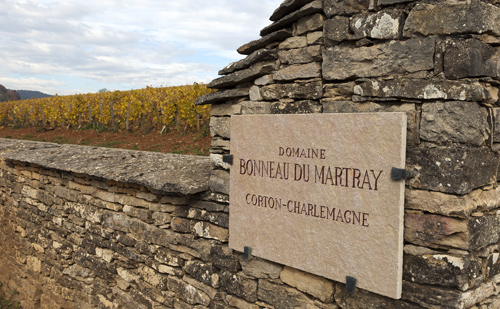 A wine with a golden translucent colour and a lively brilliance, this Corton Charlemagne delivers an intense and complex nose, very promising for the mouth.

The floral aromas will mingle with notes of evolved white fruit, with a touch of honey and dried fruits such as almonds or hazelnuts.

Beautiful concentration, roundness and length in the mouth complete the picture of this great vintage which is now in a moment of very beautiful blossoming, probably close to its peak. 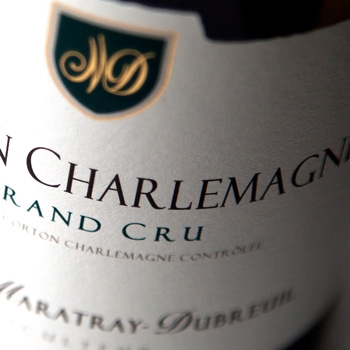 When young, Corton-Charlemagne is pale gold in colour with green highlights.
As it ages, the colour shifts towards yellow or amber. The bouquet, delicate in the extreme, features buttery notes of baked apple, citrus fruits, pineapple, lime, bracken, juniper, cinnamon, and flint. Honeyed notes are frequently present. The older vintages (25-30 years) reveal leather and truffle. Both the glass and the palate are filled with its powerful exhalations. Corton- Charlemagne is an astonishing demonstration of what the Chardonnay grape is capable of in terms of richness, power, concentration, distinction and balance. Rarely do we see such a perfect synthesis between grape variety and terroir.

The manner in which Corton-Charlemagne achieves a perfect balance in the mouth between its remarkable acidity and its rounded opulence demands refined and delicate dishes which nonetheless possess real aromatic power.
The natural candidates would include foie gras, whose bitterness would be supported by the wine’s forceful minerality, as well as more conventional classics such as good-quality crustaceans (lobster, crawfish, crab) whose strong but delicate flesh harmonizes with the wine in a spectacular fashion. Poultry or veal in white sauces would also do the wine justice, as would blue cheeses.
Serving temperature: 12 to 14°C.

Situated almost on the border between the Côte de Nuits and the Côte de Beaune, and at altitudes between 280 and 330 metres, much of the Corton- Charlemagne appellation faces south-west (which is uncommon in these parts). The Hill of Corton, high and rounded, has vineyards on three sides corresponding to the three villages of Aloxe-Corton (Climat: Le Charlemagne), Pernand-Vergelesses (Climat: En Charlemagne) and Ladoix-Serrigny (Climats: part or all of Pougets, Corton, Languettes).These vineyards were a gift of the Emperor Charlemagne to the religious community of Saint-Andoche de Saulieu in the year 775. It remained in their possession for a thousand years, and today still celebrates, at least in name, their illustrious benefactor. The appellation is made up of two Climats, Charlemagne and En Charlemagne, plus some neighbouring plots. Unlike the Corton appellation, the name of the Climat is not mentioned on the label. Its Grand Cru appellation dates from July 31, 1937.

The Corton Charlemagne appellation occupies the highest portion of the Hill of Corton where the gradients are steep (20-23%). The hill itself offers an exemplary geological section through the younger (145 million years) Jurassic strata which lie between Ladoix-Serrigny and Meursault. The colour of the clayrich marly soils varies from yellow through ochre to brown. Limestone alternates with marls beneath a thin cover of rendzinas. At mid-slope the mainly red wines of the Corton appellation grow on soils appreciably different in character.